ECM Titanium driver update on Bosch EDC17CP57 equipped on Mercedes-Benz Vehicles. Find out what you can do by intervening on the right maps!

The Alientech team that deals with the Drivers update has focused on the Bosch EDC17CP57 equipped on Mercedes-Benz vehicles. Intervene on the right maps and discover what you can do thanks to ECM Titanium.

This ECU equips some of the diesel-powered vehicles by Mercedes-Benz, in particular the 3.0l and 2.2l diesel engines equipped both on commercial vehicles (Mercedes X-Class and Sprinter) and on passenger cars (Mercedes E-Class, ML, GLC, GLE, etc.).

Both of these engines, as per Mercedes tradition, are designed for high mileage, maintaining an excellent compromise between reliability, performance and efficiency. Thanks to ECM, however, it is possible to make these engines even more efficient and even more performing, by intervening on the management of torque, injection and boost and rail pressures. Below is an example of the maps that can be changed: 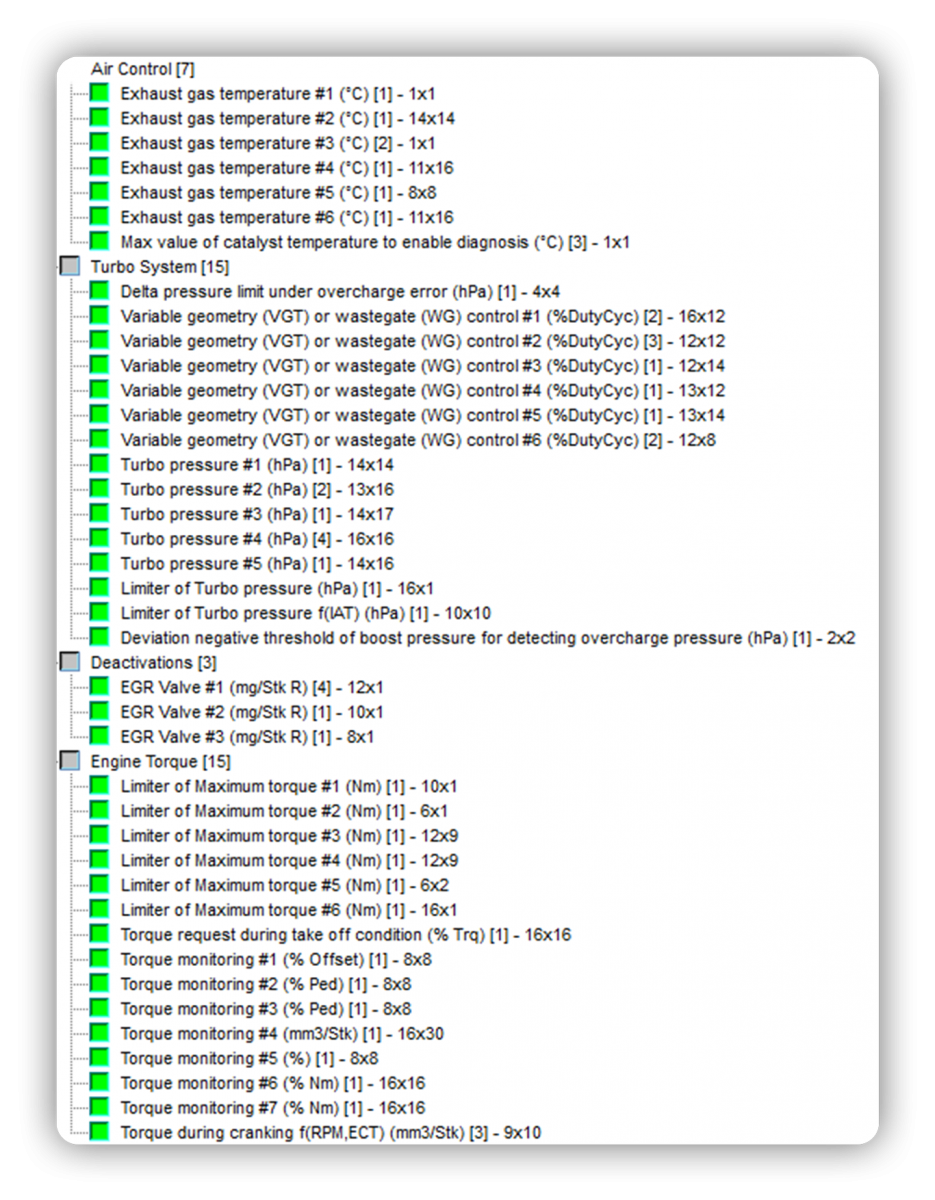 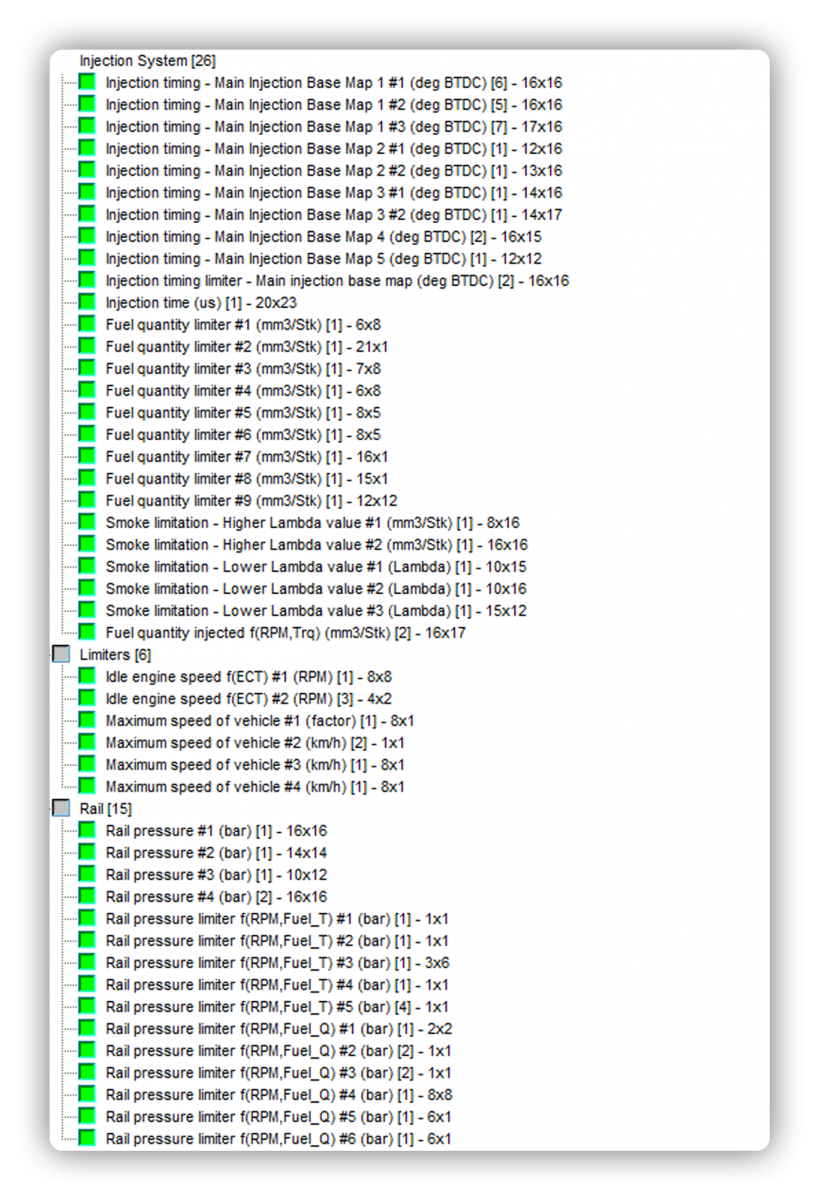 In engine torque management, it is possible to intervene on the parameters relating to the torque delivered by the engine and that requested by the driver. Using the maps of the Maximum Torque Limiter, it is possible to increase the maximum torque value that the engine can deliver based on certain factors (gear, temperature, atmospheric pressure, etc.).

If, however, I want to make the car more reactive on the accelerator pedal, I will have to work on the maps managing the requested torque. These maps, based on how much I push on the accelerator, allow me to define how much torque to deliver to the engine.

All this increase in torque, coupled with other changes in fuel and turbo pressure can lead to a problem with the torque monitoring. In fact, many modern management systems require the deactivation of a specific map in order not to have recovery problems: torque monitoring. By setting this map to zero, the control function that the control unit performs during operation is inhibited, thus avoiding the occurrence of problems with the vehicle.

In order to obtain a good result in terms of performance on diesel engines, it is necessary to provide the right amount of fuel in the combustion chamber, therefore it will be necessary to intervene on the maps of the injected fuel quantity in order to request a greater supply of fuel to the engine during hard accceleration.

In addition to the quantity, however, it is also necessary to intervene on the fuel quantity limiters in order to set a maximum quantity of fuel to be injected: by intervening on the limiters it will therefore be possible to set a desired value of fuel injected, in some cases also based on factors that can influence vehicle operation. Of course, one of the most important factors is the temperature: the higher the diesel fuel injected, the higher the engine’s temperature.

In addition to this, in order to ensure complete and efficient combustion, it is possible to intervene on the angle relating to the Injection Phase, thanks to which we can anticipate the opening of the injector at will.

A final function, related to the injected fuel, is related to the Smoke Limiter. Particularly on vehicles equipped with a DPF, this map is particularly useful in order to preserve it as much as possible. On the other hand, however, it greatly limits how much fuel to inject and consequently also the performance of the vehicle. By reducing the lambda values ​​or increasing the diesel quantity values ​​in the relative maps, it is possible to reduce this limitation. But be careful: operating on these maps it is possible that the carburetion becomes too rich and can clog the Particulate filter!

The EGT management maps are extremely useful in order to preserve the reliability of the engine and prevent the possibility of breakage caused by an excessive temperature of the exhaust gases. Generally, however, the engineers in development have kept on the original maps, values ​​far from a limit temperature that can withstand the engine. Generally during the remapping phase it is useful, to prevent the car from going into recovery, to intervene and raise the EGT limiters by a few tens of degrees as often modern engines, due to the anti-pollution systems, tend to heat up a lot and with minimal increases on the diesel maps go into protection. Be careful not to raise this threshold too high: if the EGT goes too high, the engine could break.

Working on the Turbo Pressure maps and the related turbo pressure limiters, you can set the desired boost pressure. On the one hand, this allows for greater engine performance, and on the other hand, it allows you to balance the amount of diesel injected with an adequate supply of air. Obviously, it is always advisable to know how far you can go with the increase in turbo pressure, in order to avoid breakage of the turbocharger.

In the management relating to the Rail Pressure, it is possible to intervene on the fuel pressure. Generally on these vehicles the rail pressure is between 1600 and 1800bar: it can however be given a small percentage of pressure more, which allows an improvement in engine thrust. Generally it is advisable not to exceed too much in the increase as the high pressure pump would be easily subject to breakage.

EGR DEACTIVATION (Track use only)

Deactivating the EGR allows you to inhibit the operation of the exhaust gas recirculation valve. This valve picks up the partially unburned exhaust gases by re-inserting them into the intake again, which allows a reduction in NOx emissions. Disabling the EGR will therefore have cleaner air in the intake and greater engine efficiency.